About the Library | Mission and History

The Camden Public Library is an anchor for the community. We bring people together to Read, Connect, and Discover.

Several years later, in 1854, the Ladies’ Library Association opened in Mrs. Jesse Hosmer’s house on Wood Street. The library later moved to the second floor of the Camden National Bank building and remained at this location until the disastrous fire of 1892 that destroyed the Camden business district. 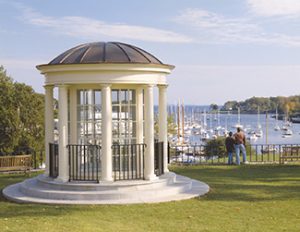 On March 23, 1896, the citizens of Camden voted to establish a free public library to be known as the Camden Public Library. The proud townspeople of Camden raised the money to build this library through various fundraising efforts. No assistance was provided by library philanthropist Andrew Carnegie. Mary Louise Curtis Bok donated the land for the library in 1916. Parker Morse Hooper and Boston architect Charles G. Loring offered building plans. The cornerstone was laid on August 17, 1927 and the Library opened its doors on June 11, 1928 with Miss Katherine W. Harding serving as the first librarian.

In 1996 the library underwent a great expansion under the south lawn. The opening of this Centennial Wing allowed the library to accommodate larger collections and computer-based technology without compromising the scenic or historic value of the original building. Today the library is a true treasure of the coast of Maine and is a testament to the pride and determination of the residents of Camden.